WHAT UNMET NEEDS ARE BEHIND BLAME? Example from a real life incident. 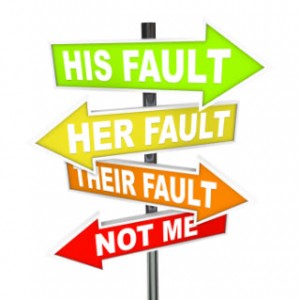 The other day flying back from a trip I overheard two interesting arguments that got stuck in blame with no understanding for either side.

We had been waiting at the gate at the appointed boarding time for over half an hour with no announcements and no signs of life from ground staff. Frustration and anxiety rose with the passing of time and lack of information.  After forty minutes, ground staff suddenly appeared and we were finally boarding.

As we got onto the plane, a woman immediately complained to a stewardess holding up the queue of passengers behind her.  Agitated, she said that because we’d not been told about the delay earlier, she had not been able to text her husband to warn him at the other end.

The stewardess explained the reason for the delay and said that the airline wasn’t responsible for what had happened inside the terminal, but assured her that there was still time to send a text before takeoff.

The woman went to her seat, complaining as she shuffled down the aisle.

Some time into the flight as the stewardess was serving drinks, the same woman walked towards the trolley, clutching her mobile phone in her hand. This was their second exchange:

Passenger: “I can’t send a text! You said I could send a text, but I have no signal!”  Some passengers sniggered.

Passenger: “But you said that I could send a text! How is my husband going to know when to come and meet me?”

Stewardess: “Madam, I explained earlier to text before takeoff. There’s nothing I can do about there being no WiFi in flight!”

Passenger: “But you said that I could text and now my husband won’t know we’re delayed! And when I last looked, your website showed no delays! The whole thing is a joke! How am I going to text him now?!”

Stewardess: “Surely you’re not going to also blame us for the fact that there’s no WiFi in the air?! You’ll have to wait now; there’s nothing we can do. I did say to send it earlier.”

The argument ended with the passenger walking back to her seat and muttering under her breath. The stewardess and some passengers mocked her as she left.

So what unmet needs were really behind this Ping-Pong of blame?

Frustration, irritation and anger all have unmet needs and fears behind them. Fears may relate to unmet needs as well as self-esteem and social rejection.

The majority of conflicts begin because of unmet, disrespected needs, power struggles and social exclusion. So, if unmet needs are cause of conflict, then understanding and meeting those needs, wherever possible, is the starting point towards its resolution.

In this case we may venture a guess as to what these two women may have needed.

Anxious and frustrated from the start, the passenger may have needed more:

The stewardess may also have needed:

Unmet needs and blame tap into our fear instincts and reactions of fight, flight, freeze.

In this case, both were hooked into ‘fight’ and the result was a win-lose game of passing the buck back and forth.

The stewardess for her part, hooked into the blame-game in both exchanges by defending and justifying the airline’s position in the first instance, and by taking personally in the second.

In doing so, she fed her own triggers and fears and didn’t meet the passenger’s needs. By going on the defensive, she blamed back and ultimately ridiculed the woman to prove her rightness in the argument to the audience.

The Molotov cocktail of unmet needs, fear and blame:

It can be very easy to react in situations when our basic needs are not met and our fears are triggered. When these are sparked, our self-esteem and need for respect also feel, or are, at risk.

Blame then becomes a hot potato that causes our fear of social exclusion through wrongdoing.

In this scenario, neither and both were at ‘fault’.

So how do we speak in a way in which we identify our needs and explore another’s?

1. Acknowledge: We all need to feel understood, heard and treated with respect. Acknowledgement in this case means saying:

“I hear/appreciate that you are feeling frustrated at not having been told what was happening and that you would like to contact your husband.”

“I know you are not personally responsible for what’s going on, but I am really frustrated by the handling of this situation and anxious to warn my                     husband that I’ll be late.”

2. Explore what unmet need is behind the complaint.

E.g:  “What do you need right now that may reassure you or provide a possible solution to this situation?”

3. Don’t take it personally. This can be easier said than done at times, but often people vent their anger as a result of unmet needs and triggered fears. Be         curious. Explore what need is behind this?

Being aware of our own patterns and triggers and core assumptions that tap into our self-esteem can help us move away from getting hooked into blame.

These three steps can help us reframe from blame to understanding and move the conversation forward towards exploring solutions.

What unmet needs do you feel lie behind a blaming conversation you have been involved in?

Enter your email address to get new updates to your inbox.